Ad copy that assumes something not in evidence 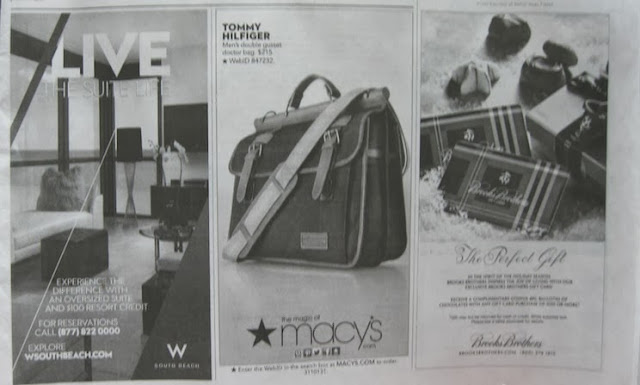 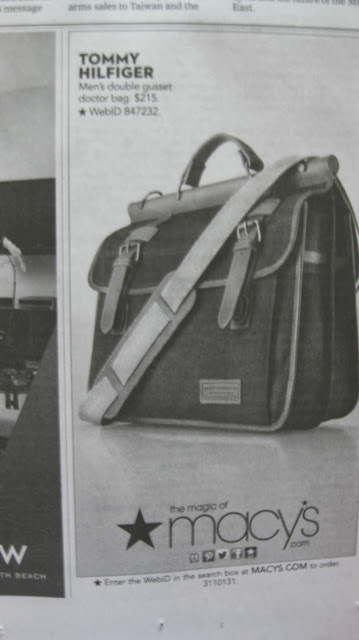 Notice the description of the bag: "Men's double gusset"

What makes this a man's bag?

I know at least one female literary agent who was enchanted by it.

Does it dissuade female buyers to list a product as "men's?"

Would it dissuade male buyer if it was listed as "women's"

Why are we adding gender preferences to a briefcase in this day and age anyway?


Posted by Richard Gilbert at 5:18 PM No comments:

I had an early lunch with one of our accounts. After lunch I walked toward Macy’s, enjoying one of those refreshingly cloudless, Indian summer spells. The streets were busy, coats had come off, and spirits were high. Friday afternoons do anticipate weekend play and freedom. I wanted to keep walking but when a cab discharged a passenger in front of me, I jumped in. We had only gone a short distance, when the cabbie turned suddenly, and shouted something I didn’t understand. I did the second time.

I told him to speed to the agency. There, the staff was listening silently, nervously to office radios. There were sobs, embraces, tears, but few words.

We all died a little with the loss of the president, particularly this young, unfulfilled one. Assassinations are for history books, not personal experience. The reality is just too painful. That blast from a high-powered rifle in downtown Dallas took something precious from all of us. I saw it in the red-rimmed eyes and frightened faces of those I passed on the street. I soon found myself at the northern end of the United Nations. I climbed the steps, crossed the broad quadrangle, and stared at the river. The tide kept tapping the embankment in orderly sequence. There were no other sounds. I welcomed the stillness.

In my mind, I saw Jack and Jackie Kennedy at Hyannis Port and all those incredibly happy family pictures. I thought of the Cuban missile crisis and the unyielding words of leadership. I saw Jack and Jackie entertaining at the White House and began to understand why England reveres its king and queen. The handsome, young Kennedys had an air of royalty and their style and manner seemed to elevate us all. And what pride we felt following JFK’s summer’s trip to Europe when he received one of the largest and most emotional receptions ever accorded an American president.

I picked up a small stone. I just wanted to have something of that day. I kept staring at the river.

“The pressures of life are not always distributed by choice. Who says life has to be fair?”

John F. Kennedy said that.
Posted by Richard Gilbert at 10:06 AM No comments: 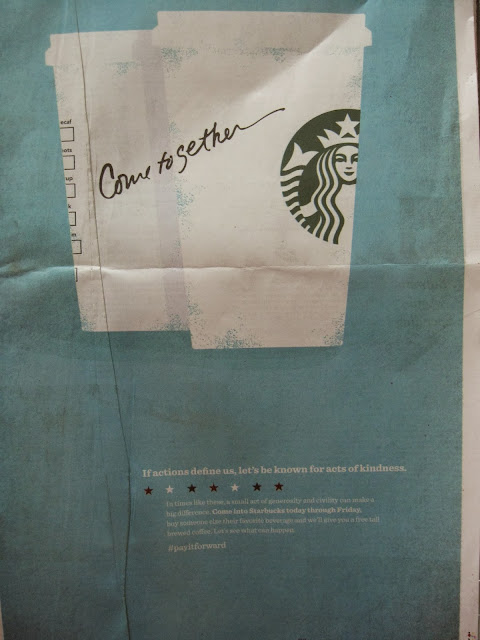 This ad is brilliant for what it doesn't say: it's the anniversary of John Lennon's birthday (October 9)

Instead it quotes one of his iconic lyrics "Come together" and then offers the reader a reason to buy a coffee that has nothing to do with coffee.

Here's the text of the ad: 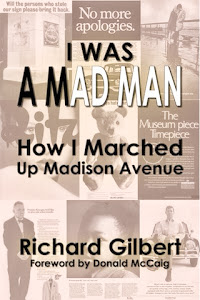